Snoring and its place in the sleep hygiene space has become a cultural phenomenon in itself. It is difficult to think of a more pervasive issue relating to sleep; TV shows, movies, cartoons, books, etc all have been writing jokes around the issue for decades.

However, those that deal with the issue themselves know that it is no laughing matter. Snoring can be extremely disruptive to those around you, and could be indicative of greater health problems such as obstructive sleep apnea. One of the lifestyle changes you can make that positively affects these conditions is the use of “positional therapy”.

Sleep position turns out to be a factor in controlling snoring. A 2015 study submitted to Scientific Reports, an online peer review scientific journal, found that the use of a specific pillow that raised the level of the head and neck was helpful in raising the comfort levels, overall restfulness, and reducing snoring of participants who did not report to be overweight.

One of the findings in this 2015 study is that possibility of pharyngeal collapse was reduced by sleeping on your side in what is called the “lateral” position.  You are most prone to experiencing blockage of the airways when sleeping on your back. This is referred to as the “supine” position, and creates more of a risk of blockage due to pharyngeal collapse.  This means that the position of the pharynx is different depending on body position, and is more easily collapsed when laying on your back.

The pharynx is in the very back portion of your mouth.  It is responsible for allowing air to pass through your mouth or nasal passages and into your lungs.   The whole purpose of positional therapy is to develop new ways to keep OSA sufferers from shifting on to their back while they sleep.  This is important to note as the head-positioning pillow made participants turn their heads to the lateral position more often than those that use a typical pillow.  A head-positioning pillow could help mitigate obstructive sleep apnea issues while still maintaining the comfort you would get from a typical pillow.

Is A HPP Right For You?

Head-positioning pillows offer something that has been long sought after; a more comfortable way to keep OSA sufferers off of their backs and in the lateral position.  There do not appear to be any health risks associated with the use of a HPP, and the benefits are huge for those seeking relief from this issue.

Participants who were at a healthy weight saw objective improvements in their overall comfort, in their restfulness, and snored less with the use of a HPP.  Overweight participants reported similar improvements, but did not objectively test better in the aforementioned areas.  The head-positioning pillow is likely the answer to your problems if other sleep posture devices have failed you in the past. 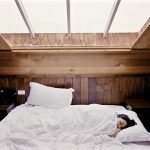 Should I Nap – Tips to Avoiding That Groggy Feeling

Sleeping Through The Night: How to Get Your Full 8-Hours

Which Mattress Topper is Best?

What Mattress Is The Best?

Reducing Insomnia and Anxiety with a Weighted Blanket

Are You Sleep Deprived?

How Your Lack of Sleep Is Making You Lazy